This is the latest incarnation of 3D Minimus. He's made of felt and cotton wool, with florist's wire in his arms, legs and tail. I based the head design on the finger puppet that's on the website, but made the mouth so that it opens. That was probably the most difficult bit to do. His fingers are wrapped in embroidery silk, as are his toes. I see that he has whiskers in this photo - they were made of plaited thread and didn't last long. I really need to come up with a better idea, such as waxed thread. 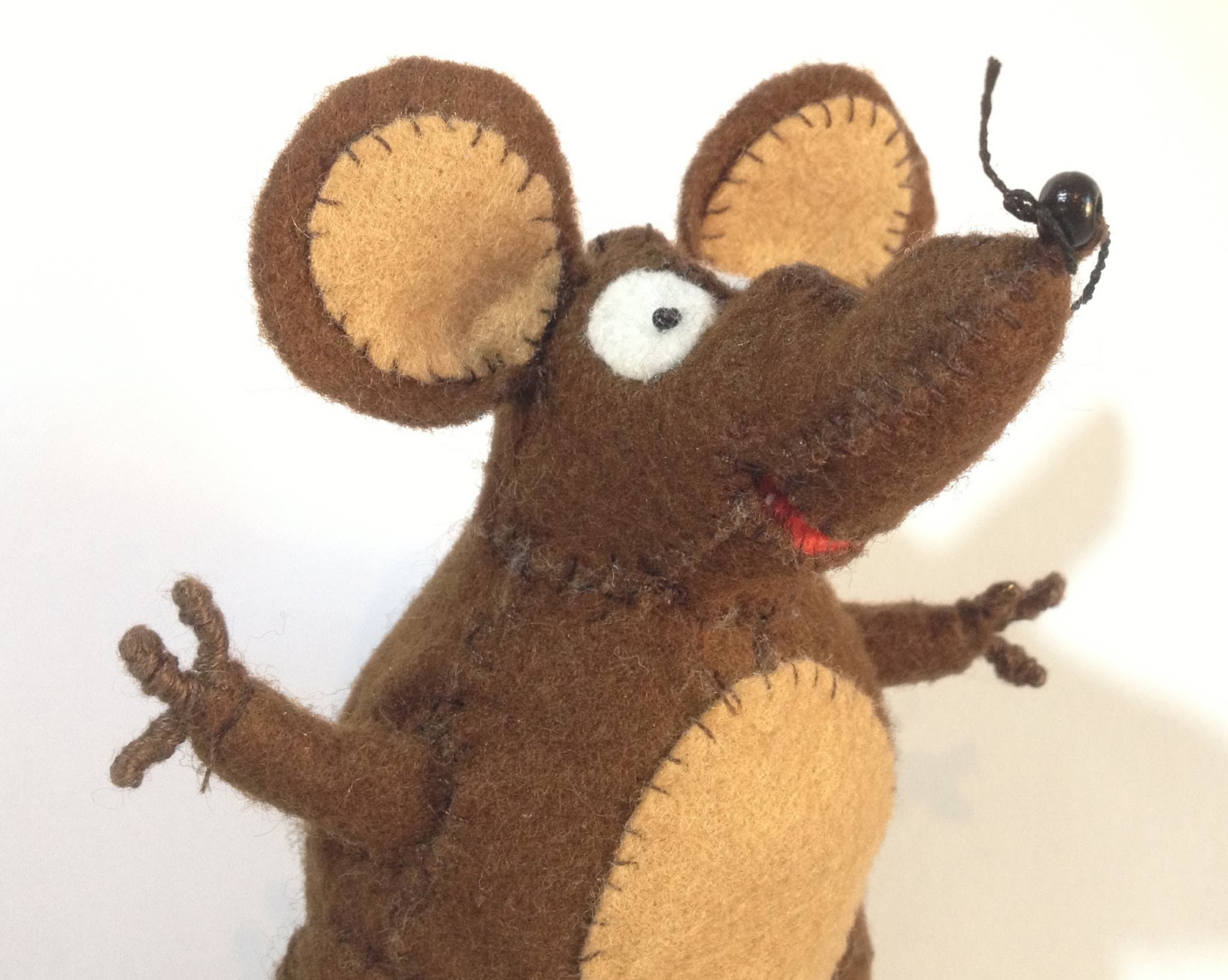 Minimus was first seen out in public in his Saturnalia hat, with a wine cup. 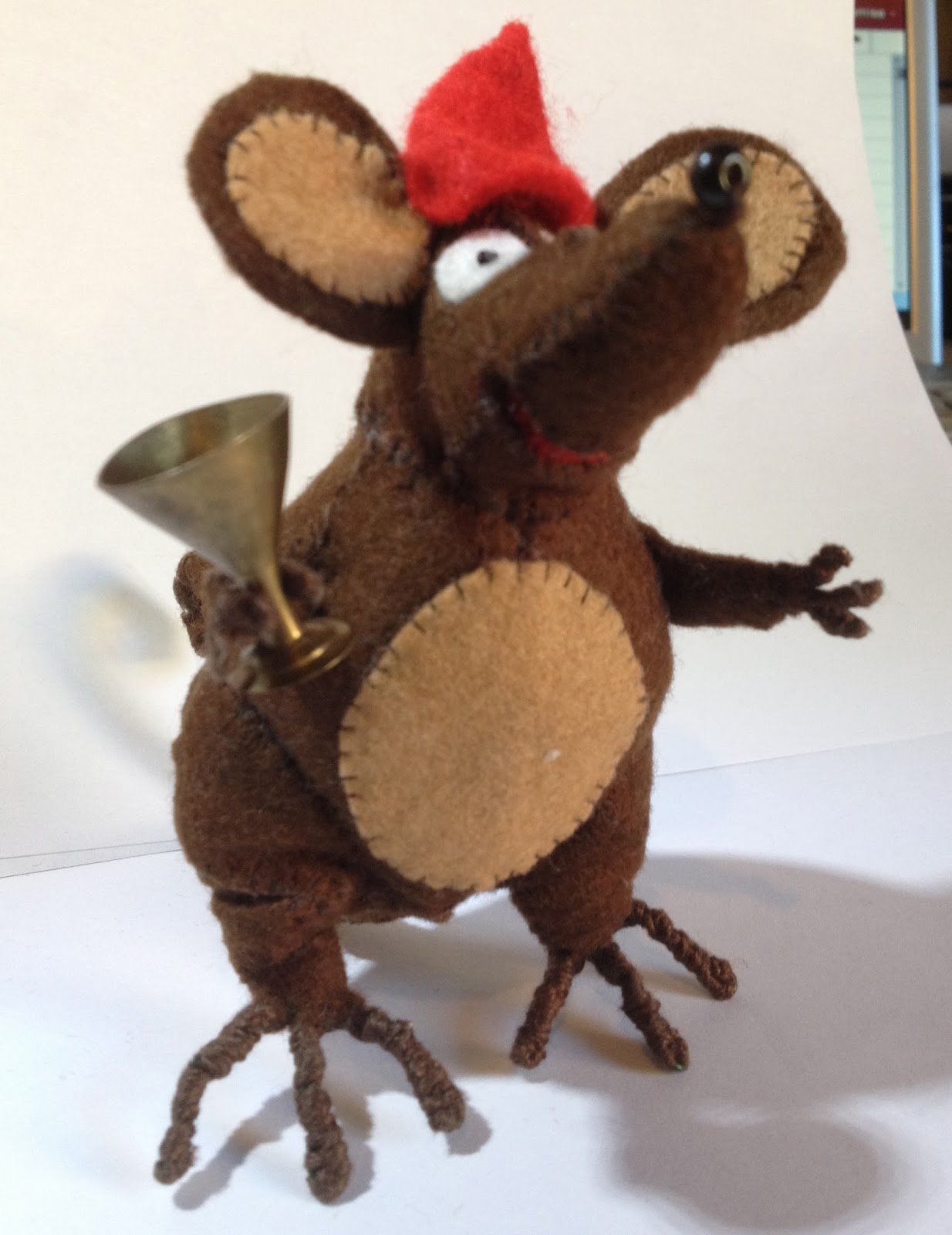 As Minimus is religiously tolerant, he also celebrated Christmas with a set of antlers and some tinsel. He spent the festive season surveying the world from the top of my Christmas tree.  The antlers are felt and wire, and the bells tiny gold beads. The tinsel is a pipe cleaner from a craft kit. 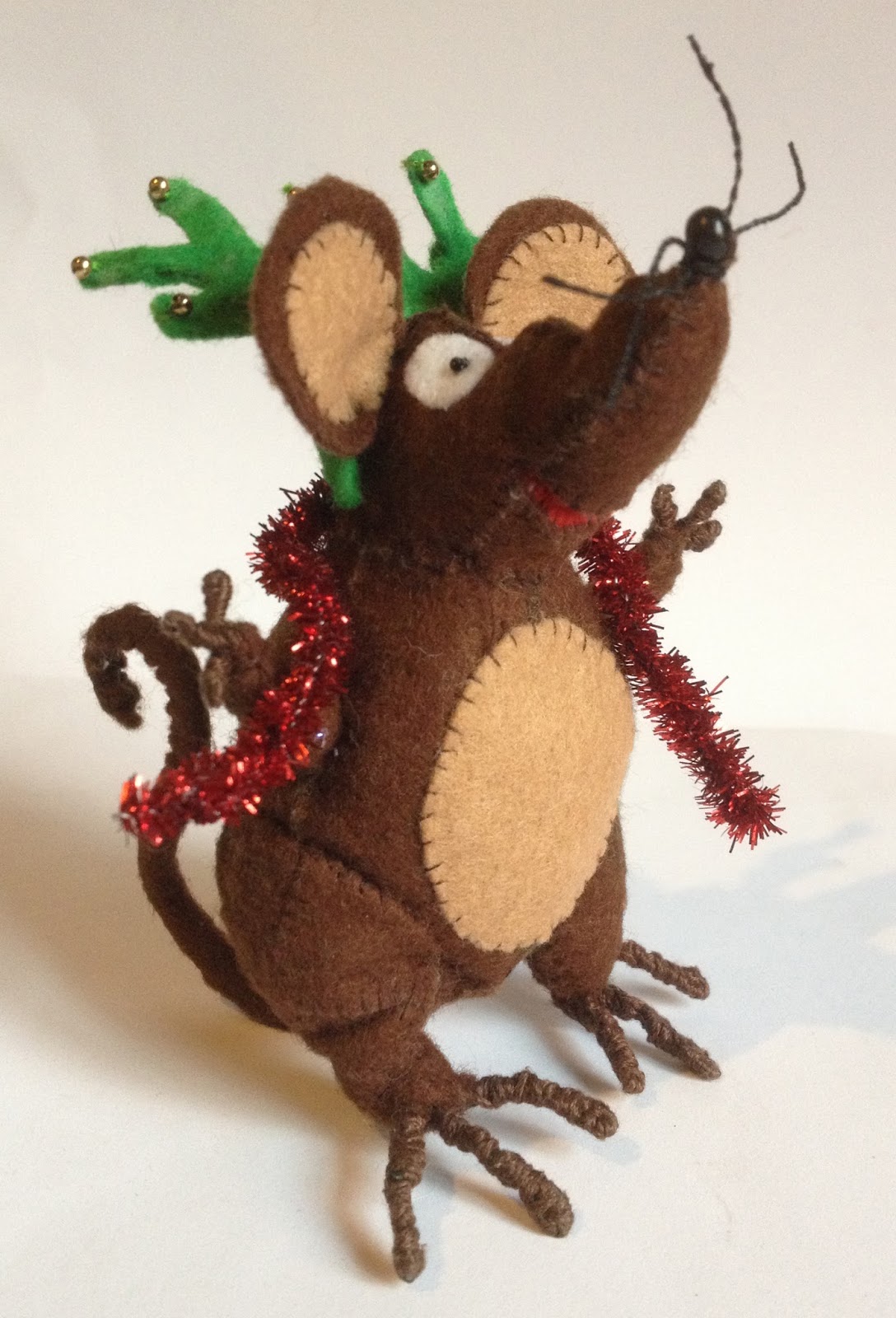 Obviously, Minimus has been very excited at the publication of the third set of MiniBooks. He has his own copies. I made them by printing the cover designs very small and wrapping them round mount card rectangles. 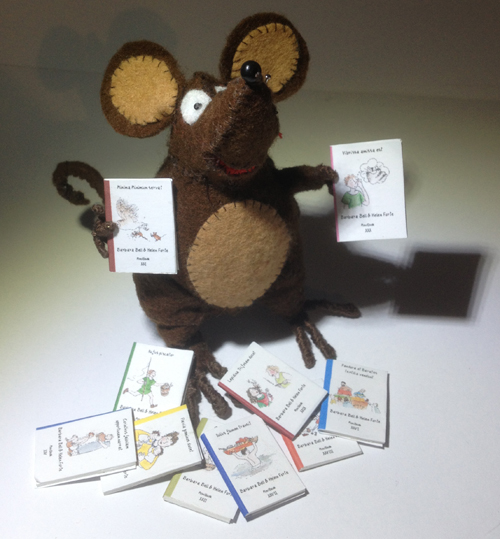 The cold weather hasn't bothered Minimus at all, as he is wrapped in his British cloak (cucullus, or birrus Britannicus). This is felt, with a hood, and pulls over the head. It must have been a lot warmer in the wind than a simple cloak. 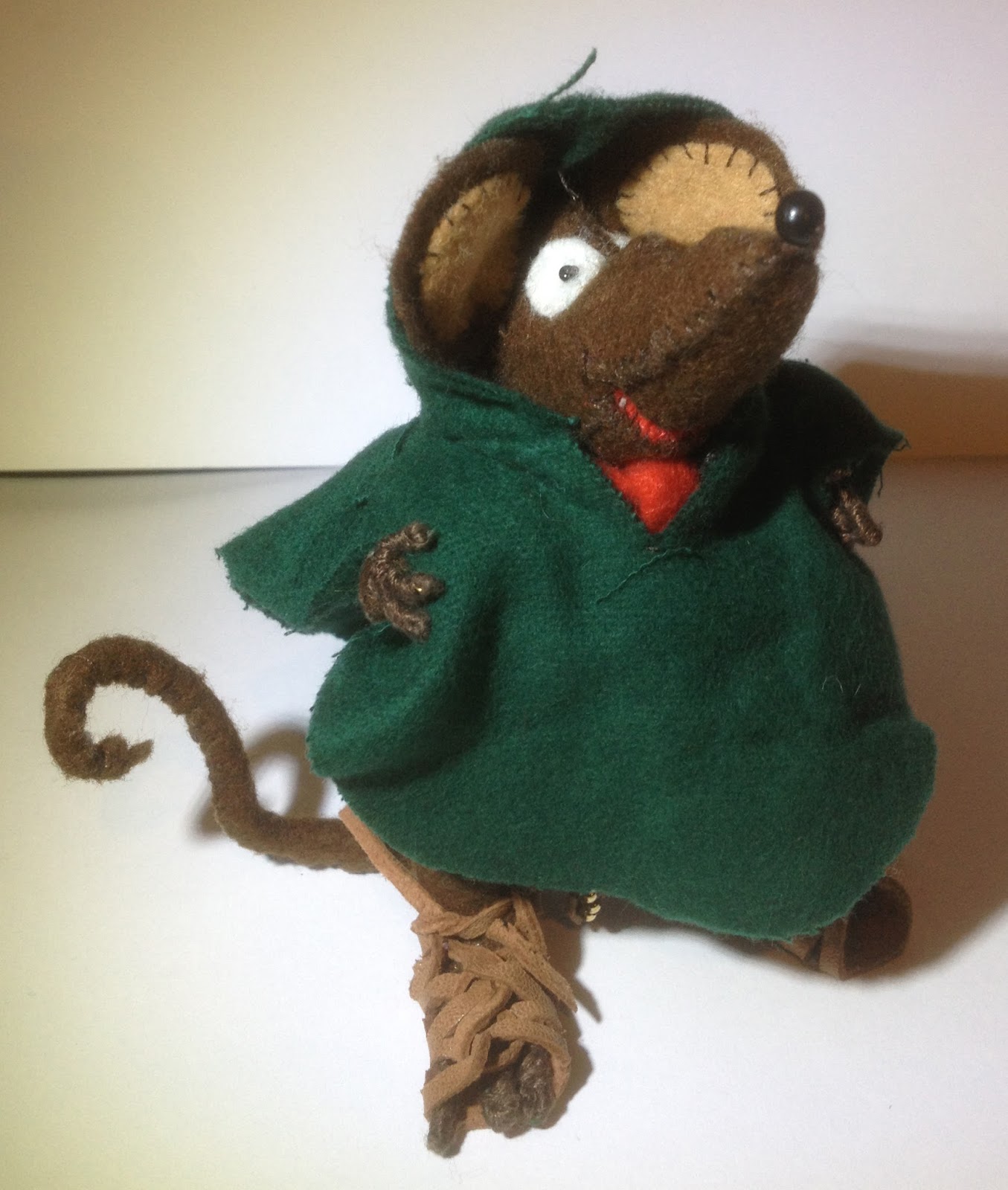 Every good Roman likes the baths, and Minimus is no exception. He is ready to go, with his towel, oil flask, bath house clogs and the all-important sponge stick. He is wearing his apotropaic amulet to keep sewer demons away. He seems to have forgotten his strigil, but that might appear later. The flask is a lovely glass jug that I found on ebay, which is where the eye bead came from too. The clogs are made of balsa and leather and the sponge stick is a little piece of sponge bound to a toothpick. 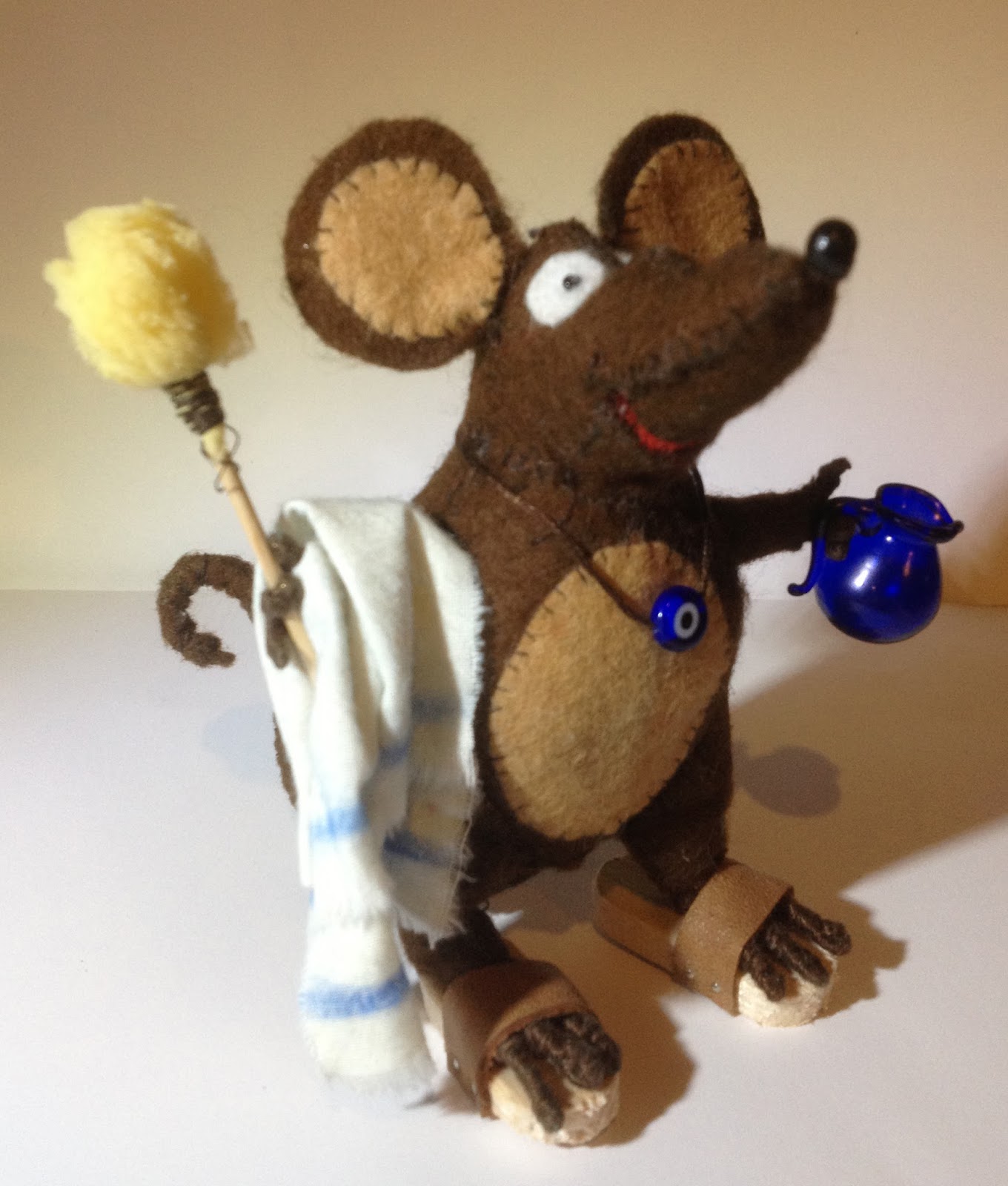 Minimus is ready to go on parade. His armour is made from aluminium ready-meal trays (the posh kind!), and his helmet from a Nespresso capsule. I used little beads as rivets, and sewed the pieces together. The sandals, belt and laces on the armour are made from an offcut of really soft leather that has been in my sewing box forever. I dithered for a long time about the shoes. In the book, I always drew the soldiers in caligae, but I understand that most of the boots from Vindolanda are the more practical closed type. Minimus is sticking to the drawings rather than the archaeology this time. The sandals did take ages, but I think it was worth it. 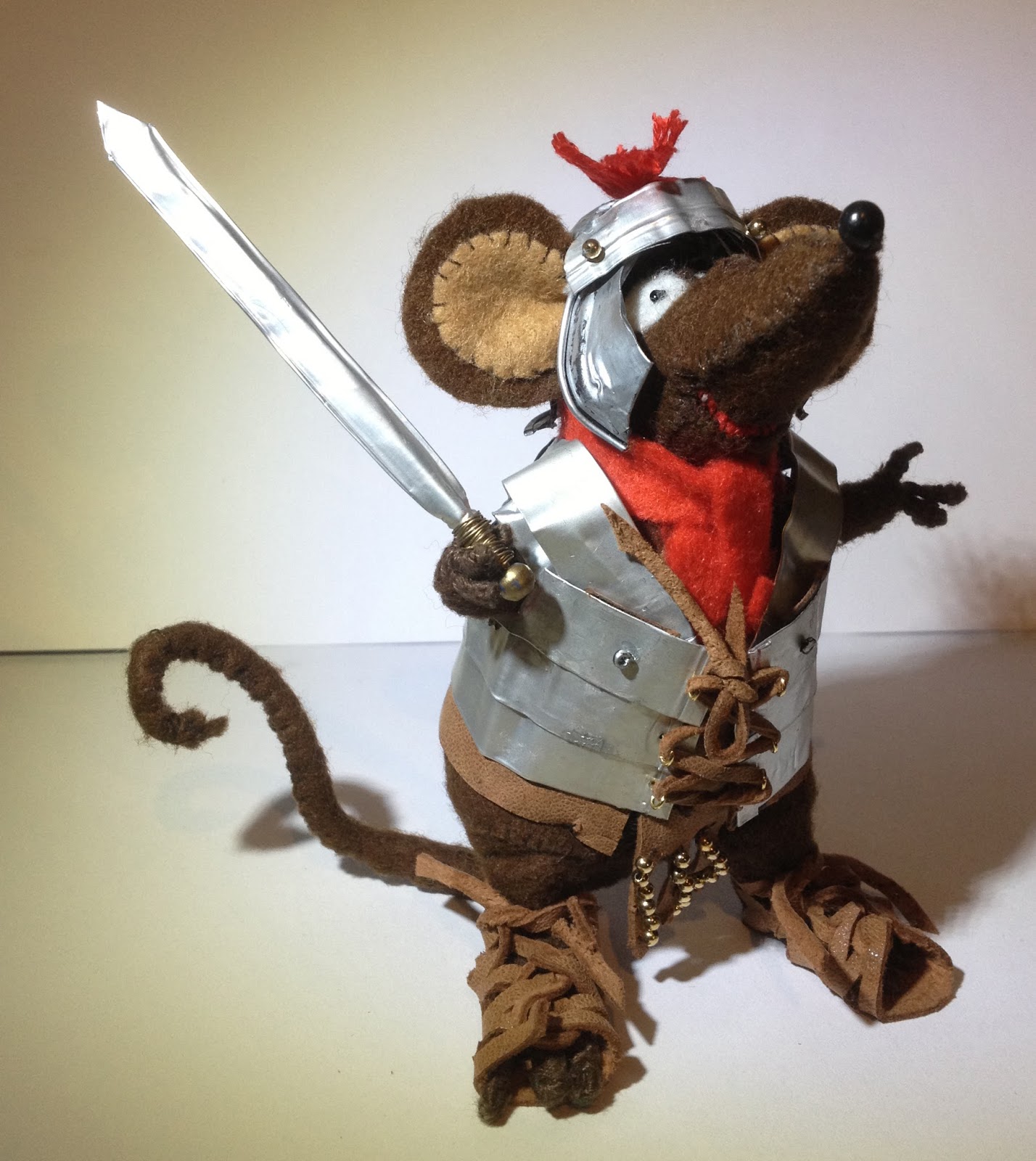 There are a few more little artefacts in the pipeline, including some "samian ware" and a glass cup - watch out for more developments!
If you want to know any more about how I made the model or the various bits and pieces, drop me an email.

I have been trying to make a three-dimensional Minimus since the early days of the project. This is the first version, made of wire, newspaper and card. I used papier mache pulp for the surface. Minimus' nose is far too long, and doesn't turn up, but I was pleased with the eyebrows! I've found it difficult to represent Minimus' mouth properly - just painting it on doesn't look quite right. 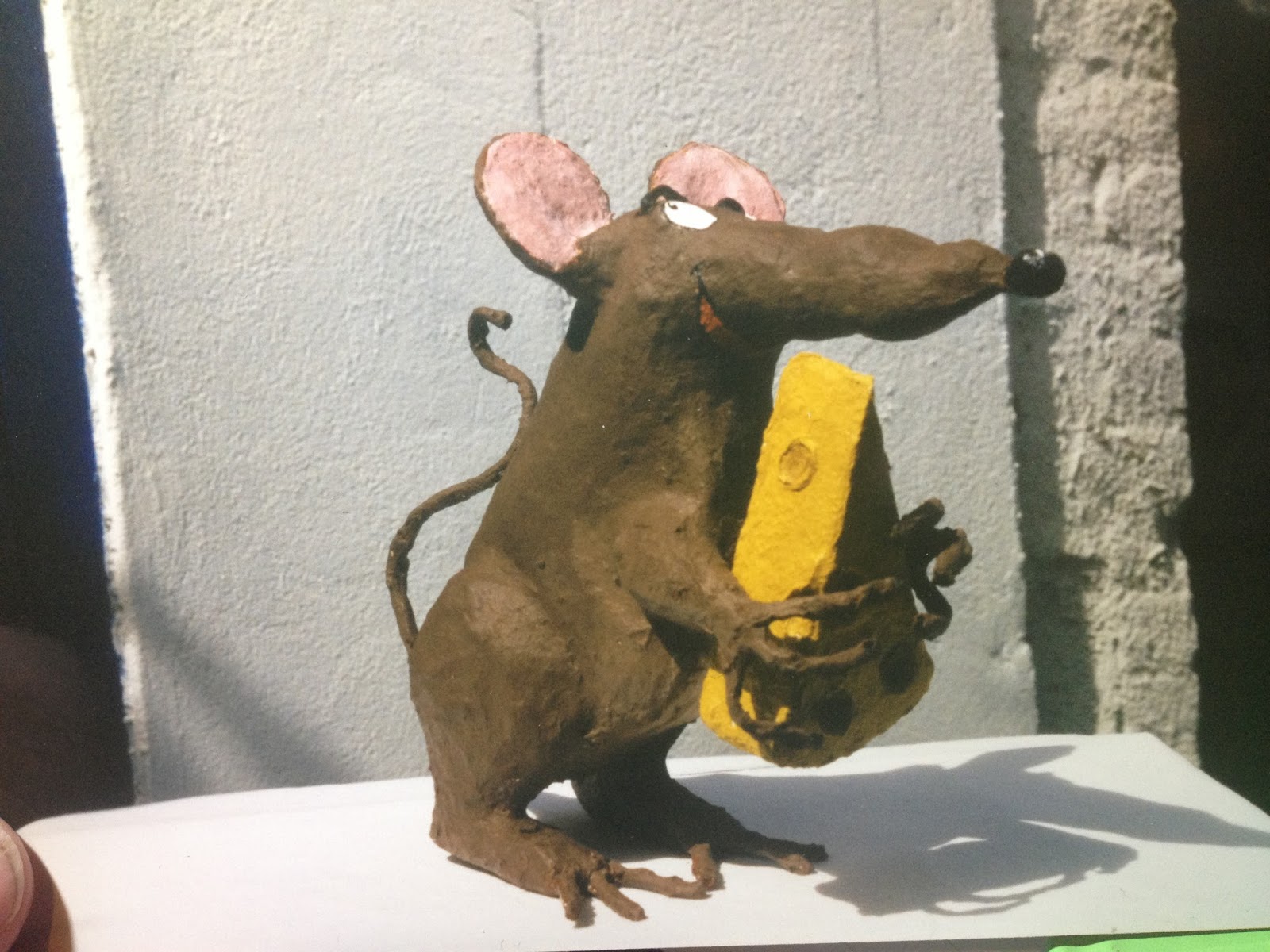 This was version two, which I made for an animation project. Minimus needed to have movable arms, tail and eyes. The inner armature is wire again, padded with cotton wool. The outer layers are made from a very fine, loose-weave cotton scrim, cut into bandages. I wrapped and sewed the layers on, and then painted it with silk paints. The mouth is fixed with double sided tape, and the eyes are made entirely separate - the black pupils are long map pins. 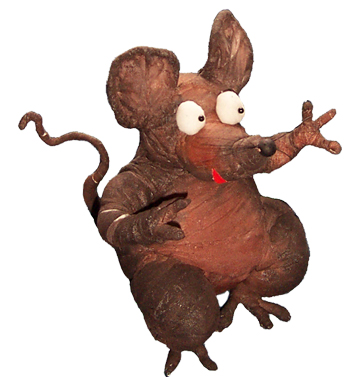 Here's the felt finger puppet - ideal for practising "quis es?" with a class. The pattern is available from the Minimus website here, and it isn't very difficult to make. I did have to make his arms a bit wide, so he could have a full set of fingers! 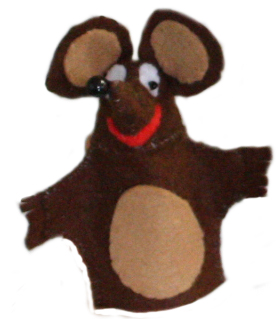 I'll write about the new model Minimus  - and all his accessories - in the next post.